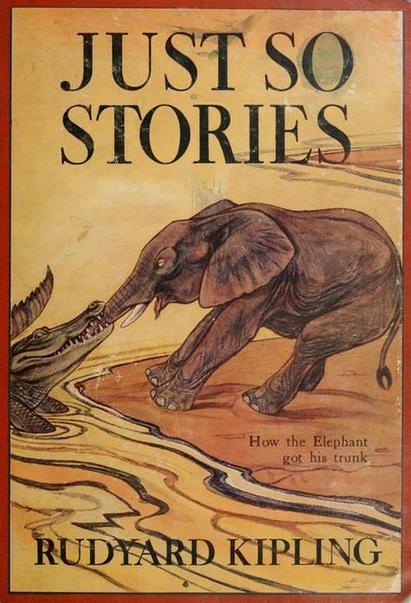 Published in 1902 the Just So Stories are fantasy explanations for how animal characteristics ‘evolved’. Each tale is full of marvels, but the real magic in them is their language, which explodes like fireworks in your ears. It thrums with a uniquely twirly dancing rhythm that sweeps you up like a magic carpet; it is crammed with lists of remote, exotic places that conjure the wonders of the wide, wide world.

TASK 1- How the Whale got his Throat

Kipling’s wonderful use of rhyme within the prose gives his writing a distinctive feel. Have a read of the story How the Whale Got his Throat and make notes of anything you notice about the language.

How The Whale Got His Throat by Rudyard Kipling

This is a story by Rudyard Kipling from his Just So Stories series.In this tale you will hear why a creature as huge as a whale can only eat the tiniest of food.

Highlight all the verbs (doing words) in this passage then copy them into your book in rhyming pairs.

Two of the words are not the proper words, put rings around them and write the correct one. Why do you think Kipling used these?

TASK 3- Create your own Just So Story

You are going to be composing your own Just So Stories along the lines of the way the ‘How the…’ stories were composed. Choose an animal (a snail, perhaps) and create a title (How the Snail got their Shell). Choose one of them and invent what you think happened. Or if you prefer you can choose a different animal such as an octopus, a rattlesnake or a seahorse and explain how that became the way it is. Let your imagination go wild, nothing needs to be possible! Write as much as you can in the style of Rudyard Kipling.

Next, to help you plan your just so story, complete the story map below thinking about...