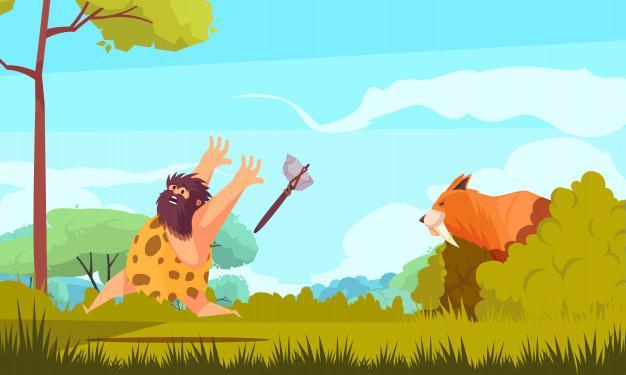 It would be simply impossible to cram millions of years of History in to one session so today we will be focusing one one intriguing aspect present during this period of time...PREHISTORIC ANIMALS! What's more exciting than the thought of our ancestors walking alongside wooly mammoths and saber toothed tigers?

Climate change during the Stone Age caused animal life in Britain to go through several changes.

During the Ice Ages, Britain was covered by ice and snow. Herds of mammoths, reindeer and woolly rhinoceroses roamed across the snow and brown bears sheltered in caves.

In the warm periods between the Ice Ages, Britain became as hot as Africa is today! Elephants, hippos, rhinos and hyenas all moved north through Europe to live in Britain.

The last Ice Age ended around 15,000 years ago and the British climate became very similar to how it is today. The forests were full of foxes and red squirrels. Wolves and bears lived in the hills.

Britain was home to most of the species of birds, fish and shellfish we have today, so people had a wide range of food to eat.

So, which animals roamed the lands?

Using the internet and information provided, can you create a fact file on a prehistoric animal of your choice?

Once you have finished, why not follow the illustrator tutorial to create some beautiful artwork to go with your research?!

Draw with Rob and create your very own woolly mammoth!!!!

Extension - So you think you could be a prehistoric monster hunter?!